Roanuz Softwares Pvt Ktd, India’s pioneering sport tech startup has acquired a significant share in the sports tech sector in the country. Currently, 75 % of the top Cricket Fantasy Apps are built with the Roanuz Cricket API. Also, Roanuz Cricket API provides various solutions like Chatbot API, Performance API to construct an effective application. For the ongoing IPL season, Roanuz has partnered with various brands and offered their product to run IPL campaigns, key ones being Zomato, RCB, and Book My Show.

Roanuz Softwares Pvt Ltd, is India’s one of the leading AI-based sports tech company offering cricket information via bot. The bot titled Cricket Bot API addresses an exhaustive set of information, from live and historical data on matches to player and team stats. 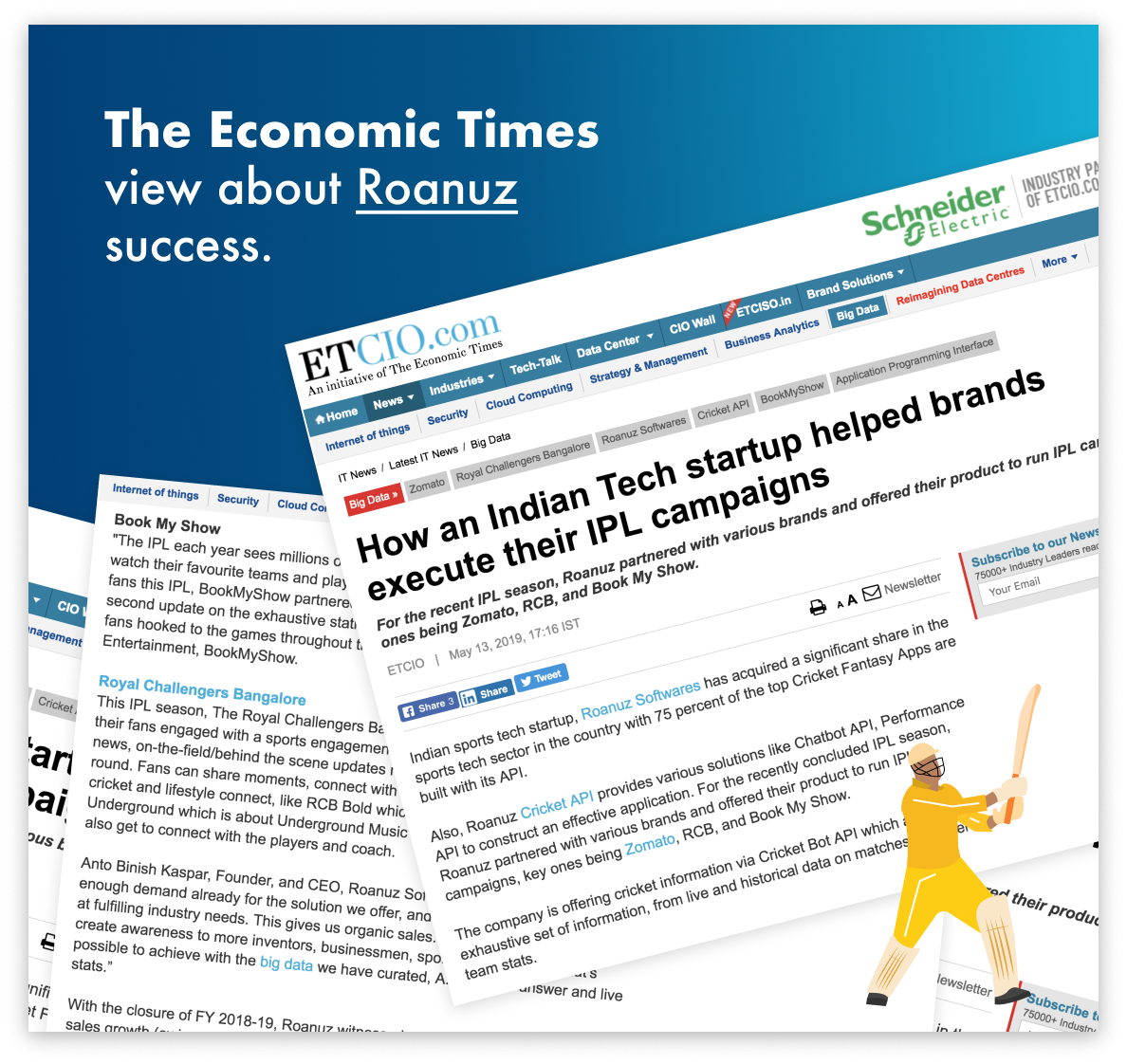 Zomato has launched ‘Zomato Premier League’, a unique in-app gamification, that allows users to predict the winner of that day’s IPL match and rewards them every time their prediction is accurate. Roanuz Cricket API provided Zomato data such as toss information, runs by a player, details of the winners, points table, playing XI, stats of the match and schedule of IPL 2019. The real-time and instant quality cricket data helps them understand the situation and provides answers to a lot of questions like Who will be the winner of the match? Or Who will win the toss? in order to validate and select the winner.

"With over 14 million predictions so far, Zomato Premier League is being played across 200+ cities in India. The systems of Roanuz Cricket API are scalable and well-maintained and documentation services have been really beneficial," said, Gunjan Patidar, Head of Engineering, Zomato.

"The IPL each year sees millions of cricket-lovers choose BookMyShow for tickets to watch their favourite teams and players live in action. To heighten the experience for fans this IPL, BookMyShow partnered with Roanuz Cricket API for a second-by-second update on the exhaustive statistics for the IPL season, keeping millions of fans hooked to the games throughout the season” said Albert Almeida, COO – Live Entertainment, BookMyShow

The Royal Challengers Bangalore came up with a new idea to keep their fans engaged with a sports engagement platform. Roanuz Cricket API helped to show the live scorecard, schedule, player stats, & points table. The app gives real time news, on-the-field/behind the scene updates not only during the season rather year round. Fans can share moments, connect with fans everywhere, consume engaging cricket and lifestyle connect.

With the closure of FY 2018-19, Roanuz witnessed a whopping increase in their sales growth (owing to the IPL season) – 276%. The splendid performance has boosted the team further, and they are now targeting a 350% hike in the current financial year.

Anto Binish Kaspar, Founder, and CEO, Roanuz Softwares Pvt Ltd said “There is enough demand already for the solution we offer, and we are doing a very good job at fulfilling industry needs. This gives us organic sales. What we would like to do is, create awareness to more inventors, businessmen, sports enthusiast on what’s possible to achieve with the big data we have curated, A.I powered answer and live stats.